Today, I’m going to entertain you with Paul Krugman, just for a little while. Granted, the man is not particularly interesting, but as an occasional occupation, I spare a little of my time to charities anyway. And this time, I will try to bring some pieces of thought on this man that once was a Nobel prize laureate in Economics before sinking in the depth of his own absurdities.

In any case, rest assured that the following rant is obviously not addressed to dear Paul: living in a galaxy far, far away, Paul is now so far away as to be out of reach for common sense. The point here is then merely to try and reach out to the journalists, especially the French ones, who keep seeing Paul as an useful guru on whom they can rely to sell their crappy, Keynesian-soaked analysis.

In all fairness, I must say that France has always been a dreamland for Krugman’s fibs and ludicrous quotes. With his baffling concepts, his perfectly assumed – yet irrational – left-wing views, and his rabid advocacy for socialism (which he tries to conceal in his op-ed under a thin layer of « economics-for-dummies »), if he wasn’t American, he would undoubtedly be French, with a first name like Paul-Edouard or Jean-Michel.

And a Jean-Michel Krugman would have every single major French media’s both full attention and soppy adulation – at every single word he’d say. Ok, actually, that’s already the case, but it certainly would go tenfold if he was born French and named Jean-Michel. One can learn from several reliable sources – from the French press in particular, which is as reliable a source as it gets when massive public subsidies are involved – that the economist « bashed François Hollande’s brand new policy » (as titled in the carefully picked, finely honed words of the article in the French newspaper Liberation) in a recent New-York Times editorial (a definite reminder that this press joint lingers on charity business here since it goes as far as leaving some room among its columns for Paul’s assertive little scribbles on a weekly basis).

On a side note, one might also observe that French journalists tend to go frantic about that « Economics Nobel Prize winner » thing at every squiggle Paul draws, while in all unfairness, they would definitely refuse to acknowledge this same trait from Hayek or Friedman (who, as everyone knows, belong to the Dark Side and thus don’t deserve any reminder of the very same achievement for themselves).

Let’s face it: France is mesmerized by this Krugman guy. From a sociological perspective, this is quite interesting: Krugman is openly Keynesian, openly democrat and, to put it bluntly, a wholehearted pro-Obama socialist (and that is an understatement). On the other hand, he’s officially a proud owner of a Nobel Prize. How could our politically-oriented French journalists overlook that fact? It’s no mystery that the vast majority of them are, by and large, Keynesians, democrats, inspired socialists and – you guessed it – Obama big, big fans. This probably explains as well why the juiciest, most scrumptious pieces of mind of this Jean-Michel from overseas keep being overlooked on the French side of the Atlantic Ocean. 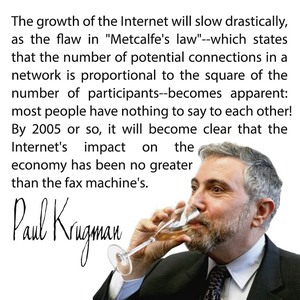 How easily they forget the actual reason why Krugman got nobelized! It never was and never could be for the relevance of his political views, nor for his keynesianism. Anyone actually trying to get some facts about him will eventually find out (for instance) that Krugman was adamant for a massive build-up of the housing bubble in the United States – a bubble that exploded with quite substantial damage, if I recall correctly. In the same vein, how could anybody neglect his outstandingly fun prediction about the Internet phenomenon and its impact on humanity, which he claimed would be in 2005 as mild as the fax machine’s? And what about his hilarious yet bewildering opinions about the economic boom an alien invasion could have on the world economy (probably copied from the nice economic perks World War II brought upon every country needing some rebuilding, minus of course a few millions of casualties and the wasted Man-Years) ?

As amazing as it sounds, all this random crap rings as sensible thinking to a French journalist’s ear, mostly because of the “Nobel Prize” label stick to it. This is the « broken window fallacy » from Bastiat all over again, and our American Jean-Michel fondly ignores it. No big deal: rest assured that in France, no one gives a damn about it ; I suppose Bastiat’s first name should have been Jean-Paul or Jean-Michel, definitely not Frederic.

Anyway, one cannot judge an economic buff by its coverage (in mainstream media, anyway), and having a second look at his area of expertise might provide us with a good bunch of LOL. For a starter, what could possibly have sparked the frenzy that got sprinkled all over French newspapers about his opinion on François Hollande’s press conference? As it appears, a very low opinion, indeed: to Jean-Michel, the French president announcements are utterly scandalous, indicating a right-wing policy makeover, an all “new and improved”, enhanced austerity in France…

Yet Krugman, chewing nervously his beard, has been saying this over and over again: « Remember kids : you know damn well that this austerity thing ain’t workin’! ». What proof should you need other than the anemic growths, sky high unemployment rates, financial disasters and economic tensions that everybody in their right mind can feel in Europe? (At this point, French journalists purr like overstuffed cats, well served by their utter and absolute cluelessness about basic economics and their total commitment to it.)

However, Krugman got it all wrong, on three counts, at least. I know that being a Keynesian, a political lobbyist and an advocate for socialism, he makes himself the perfect candidate for epic failure. However, putting these basics aside, it’s more than anything else the facts that prove him wrong here. Reality keeps on being a stubborn thing.

First, economically speaking, Krugman is sorely mistaken about Hollande’s agenda, and our witty French journalists will certainly not help him correct his course: who would claim that any free-market advocacy or principle were put into application in France lately, where 57% of any wealth produced is seized by the greedy hands of an obese government? Which country could pretend to a « right-wing economic solutions » when any « solution » offered by its government is the stiffening of every labor regulation, and the reinforcement of corporations, where crony capitalism is the one and only habit and the key to success for the power-hungry, where the economic policy has always been socialist? By any count, such a country is not and could never be considered using right-wing economic solutions.

As for Krugman’s political views, they are dead wrong, again. There will never be any right-wing, social-liberal nor social-democrat makeover from Hollande. Hollande is a political animal who moves his lips only to gain every faithful patron, follower and enthusiast he can, so that he ensures a radiant future for himself. Had it been politically astute to consider blue as the one and only true color, he would have done so, spoken about it for hours, even wearing a red tie all the while. Krugman seems so incredibly naive on the matter, believing that a man like François Hollande might actually put some of his words into action! To say the least, that would definitely be a first in a very, very long time in French history. One could be generous and forgive Jean-Michel his lack of insight but, well, I, for one, couldn’t: distance between France and Jean-Michel just doesn’t cut it. In his own country, Obama is a perfect example of everything one can invent right on the spot just to keep being in charge (Guantanamo, anyone?).

And last but not least, it’s always appalling to realize that a Nobel Prize winner could talk that much nonsense if it fits his own little agenda. Austerity never happened in Europe. Neither in France nor in Greece nor anywhere. Ever. Of course tax-payers were asked to contribute; of course private firms were crushed by taxation and various fiscal humiliations. However, as for serious budget cuts in the administration, public sector downsizing, both in terms of cost and interventionism on society, it never happened. The tax burden never ceased to grow in France, as the public sector inflated as a whole since public interventionism has never been so high. Krugman, by trying to believe that France might go right-wing or social-democrat or whatever, lures himself into the « useful idiot » part, or is fooled by his own economic illusions. 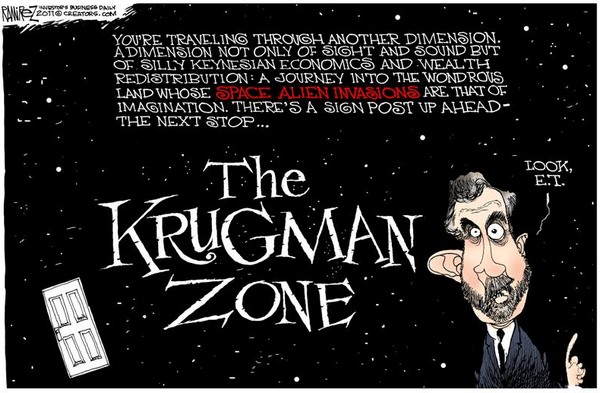 As for journalists, they happily broadcast Jean-Michel’s message, obviously rejoicing and deliciously thrilled by the idea that a 2008 Nobel Prize winner may hurt Hollande at the very moment he tries something so completely crazy that Everyone (the above-mentioned nobelized to begin with) Knows It Will Open The Gates Of Hell, no doubt.

Jean-Michel, sorry, Paul, please, deal with it: your op-ed are from time to time vaguely amusing when you rant about US but seriously, as far as France is concerned, just forget it, you’re just blabbing nonsense. No, Hollande didn’t go right-wing or whatever. He’s just going on, strong-headed, fast-driving towards the wall of reality, a wall that we will all hit head first.